One of the methods of deploying Kraken CI is installing it into Kubernetes cluster. Kraken CI is natively divided into several services packed in Docker images so they can be nicely laid out in the cluster. The other aspect is running Kraken jobs. In this case, they are run in containers natively scheduled onto Kubernetes nodes.

This guide shows how to install and configure Kraken CI in Kubernetes to leverage its potential.

There are multiple ways for setting up a Kubernetes cluster. One of the easiest ones that is most often used for experimenting is Minikube. There are also managed clusters like EKS (Elastic Kubernetes Service) in AWS.

This manual will show how to install Kraken CI in Minikube but the steps are similar for other Kubernetes environments as well.

And then create a cluster:

Now you may install Kraken CI, but first, let's add a repo with Kraken Helm charts:

This command actually upgrades Kraken CI if it is already installed but if it was not yet installed, then it installs it.

More details about using Helm to install Kraken CI can be found in installation docs.

When everything completes successfully, then at the end of the whole output there should be presented short instruction about getting the URL of Kraken service like that:

Now you may check if Kraken is working by visiting the URL given by this code and by checking if Kubernetes is running Kraken's services with this command:

This will show Kraken's pods, services, deployments and replica sets.

At this moment, Kraken CI should be operating. Please visit the website on the URL presented above. You should see a login page:

In the General tab, fill the following fields:

In all these cases minikube IP address can be used. It can be obtained using minikube ip command.

Having set the General settings, let's move to the Cloud tab. 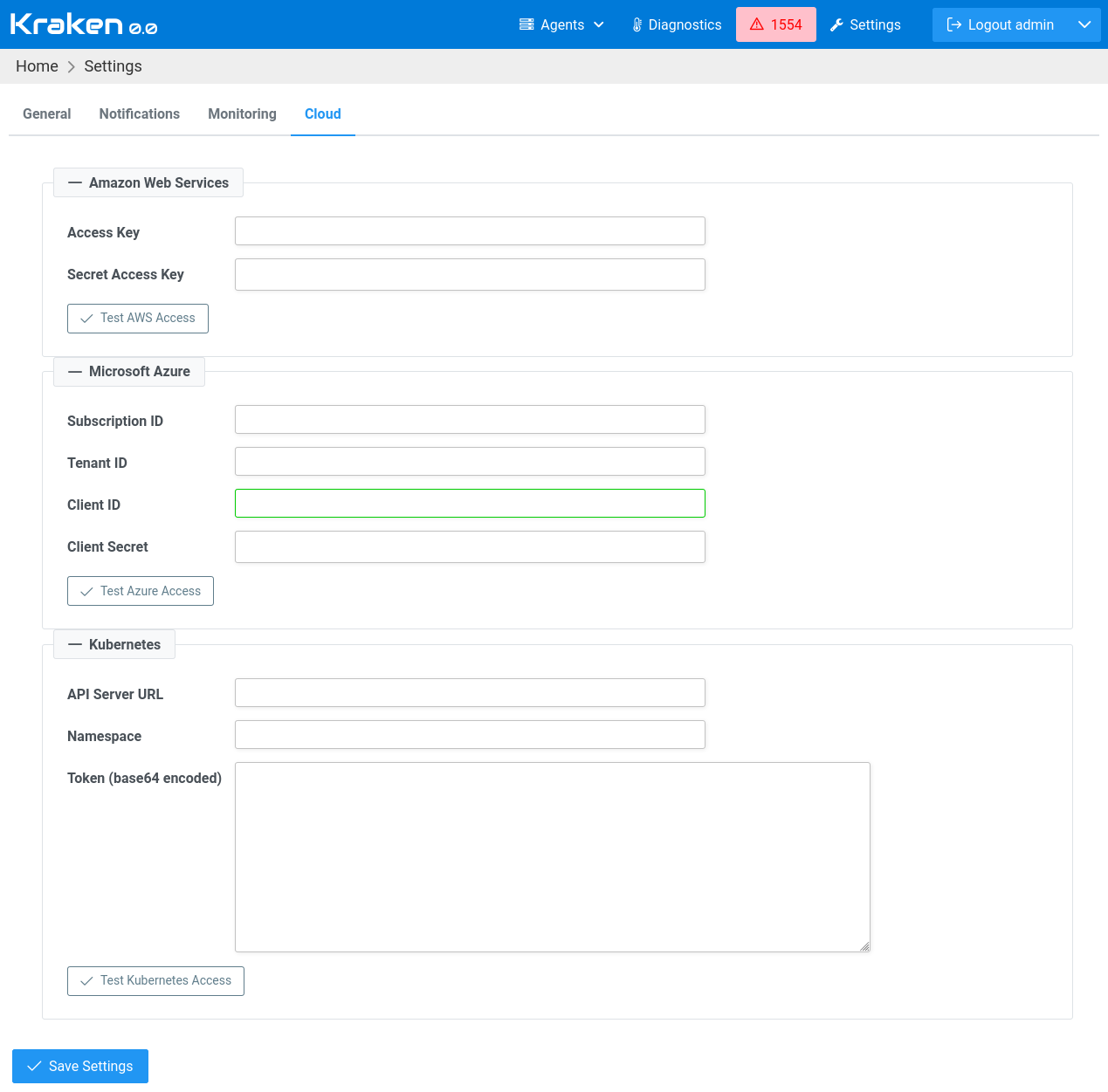 Here, please move to Kubernetes section and set only the Namespace field to the value that was provided in helm command above (if it was not changed, then it should be kraken).

API Server URL field must be empty as Kraken CI is installed inside Kubernetes and it knows where the API server is.

After setting global settings, it is possible now to configure aspects of spawning Kubernetes pods for Kraken jobs. This can be done on Kraken -> Agents -> Groups page. Let's create a new Agents Group by clicking Add New Group button and naming it k8s. The newly created group's details will be presented on a separate tab. On this tab, there is a section Agents Deployment - select Kubernetes. In this case, there is only one field to set: Instances Limit.

This limit value will not allow having more running pods than it - here 5.

Now, to use the defined k8s Agents Group, we need to prepare a project with a branch and a stage. More details about that can be found in Introductory Guide. So let's concentrate now on defining a job.

There is not much difference compared to regular Kraken jobs. The job has a defined environments section where we are pointing to our k8s Agents Group. In the case of system field here, we have a Ubuntu:20.04 Docker image.

Now when a job is assigned to an agents group with configured Agents Deployment then a new pod will be spawned for that job if agents are not available in the Kraken.

Let's change the view to Branch Results view and trigger a new flow by clicking Run Flow button. On the run page, the list of jobs shows our AWS job: